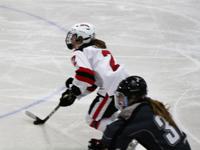 The first conference meeting between the Cougars and Lynx was on December 10 at Sun Prairie Ice Arena and both teams were undefeated. The Cougars claimed a 3-1 victory. The final goal for Cap City was an empty netter with 34 seconds remaining in the game. The game was a penalty fest, the Lynx were called for 8 penalties and the Cougars picked up 7 penalties. Cap City capitalized with 2 power play goals in the second period and killed off all 7 penalties on their team. Cap City outshot Metro 31 to 21.

Metro Lynx entered Tuesday evening riding a 7 game win streak, while Cap City had 5 straight wins. The Cougars lone loss came during the Culver’s Cup tournament on December 28, when they fell to Wisconsin Valley Union 1-0 despite outshooting WVU 42 to 14. The Lynx last suffered defeat on December 21 on the road to the ECA Stars.

Seldom does a game filled with hype live up to the billing. Wisconsin Prep Hockey’s Girls Game of the Week lived up to the hype and watched two of the top six teams in the state compete until the final horn.

The first period saw both teams moving the puck all over the ice, but it was the Metro Lynx that were able to place more shots on net. Sydney Raaths took a shot that hit the crossbar and fell in behind Cap City’s goaltender, Lexi Holman, to give the Lynx a 1-0 lead at 12:12 of the first period. This was the only goal of the period.

Cap City came out in the second period with the ferociousness of a cornered Cougar. There was a scramble in front of Addy Armstrong and the puck found its way into the net. Amanda Bauer was credited with the goal thirty-six seconds into the period. The Lynx wanted to eliminate any momentum the Cougars gained with the goal. The Lynx applied pressure in the offensive zone and a shot was taken. Holman was tracking the shot as it was headed from her right to left. Unfortunately for the Cougars, the puck was redirected while it was enroute. Holman tried to stop her direction, but the puck slipped past her right side giving the Lynx the lead once again at 1:07 of the second. Sam Olander scored the goal with an assist from Abbigale Ahlborn. The Metro Lynx were able to convert a power play opportunity with less than a minute remaining in the period. Lauren Johnson passed the puck down in the zone to Grace Bonnell. Bonnell passed it to the other side of the crease to Rachel Mirwald, who tipped in between Holman’s left side and the pipe with 46 seconds showing on the clock. The Lynx led 3-1 at the end of two periods.

Both teams continued to compete in the third period. Cap City cut the lead to one, when Zephryn Jager scored on the power play with an assist from Amanda Bauer at 11:25 of the period. Raaths scored the final goal of the game with 2:50 remaining in the period. The Cougars called timeout with two minutes remaining in the game and pulled their goaltender. Cap City applied pressure and were helped with keeping the puck in the zone due to the Metro Lynx icing the puck as they tried to score on the empty net.

The Lynx victory split the meetings between the two teams giving each one loss in conference play. Cap City will attempt to rebound from the loss on Thursday in a game against the Badger Lightning in Waunakee.  Madison Metro Lynx hope to extend their win streak to nine, when they travel to Neenah and play the Fox Cities Stars on Saturday.