Kaley Manglitz of the Onalaska Hilltoppers earned her place as Week 7 player of the week on the girl’s side with 9 points (5g, 4a) in the team’s 11-4 win over the Icebergs and 4 goals in their 6-4 win over the Brookfield Glacier.

Coach Mark Thorn had plenty of great things to say about Kaley:

In football, Kaley has broken the school and state scoring records for kickers.

In hockey, she is in the top 5 all-time scoring leaders for the Onalaska. That pretty good company considering Teresa Knutson and Jacyn Reeves are at 1 and 2.

And in soccer, she has been named all-conference.

As one of our team captains, she is hard-working, determined, always looking to improve and leads by example. She is a fierce competitor and consistently displays a willingness to do whatever it takes to win and expects her teammate to bring that same kind of competitiveness and dedication to every practice and game. Because she is quiet and shy-trust me when I say this- when Kaley does speak, its usually pretty important and very relevant to the success of our team.

Kaley is a solid B student and has been involved in mentoring and setting examples for so many young girls by encouraging them to get involved in sports. She is a great role model for the next generation of young girls.

According to Coach Tony Navarre, Stastney is the true definition of what a student-athlete should be like. Navarre writes:

In his time as a Highlander, he has notched more than 130 points. Last season, he was selected honorable mention all-state as a forward. Pierce is a multi-sport athlete; he also contributed to the Homestead Varsity Soccer team during his junior year.

Though Pierce’s athletic accomplishments are impressive, what is most noteworthy about him lies in who he is as a person. He has been an exemplary leader, not only on the ice, but off the ice as well.

Pierce makes every student and player around him better. He is not only one of the top students at Homestead High School, but in the country. He is a National Merit Semi-finalist, which means that he scored in the top 1% of students in the nation on the PSAT. His AP US History teacher stated, "I appreciate his diligent work ethic, mature interpersonal communication skills, innate curiosity, and sincere, approachable personality. He is absolutely selfless in his willingness to assist others."

He volunteers time as a coach in both the Ozaukee Youth Hockey Association as well as in an elementary school soccer program. He also invests his time in events that are organized by Homestead’s National Honor Society and Link Crew (supporting freshman student with transition to High School), both of which he is a member. Pierce represents everything that a high school student athlete should be. 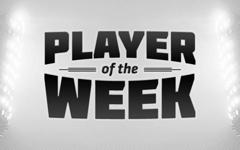