The Antigo High School alumni and member of the Wisconsin Badgers 2006 NCAA championship team spent this past season as a defenseman for Ilves in Tampere, Finland, a member of the Finnish Lilga.

Piskula returns to his hometown every summer for a chance to work with young players from throughout Wisconsin and now brings a total of 11 years of professional experience to the camp.

“I love the time I get to spend at home in Antigo,” Piskula said.  “It’s an extremely busy week of juggling camp, family, friends, and entertaining out-of-town coaches, the time away from the rink is great, but the week is always about the kids.”

That pro experience includes stints with the NHL’s Los Angeles Kings, Calgary Flames, and Nashville Predators.  Piskula also has spent a total of eight season in the American Hockey League, the top minor league affiliation of the NHL, including three seasons with the Milwaukee Admirals.

His most productive season came in the 2013-14 year, when he tallied 20 assists and a total of 23 points, earning him a call up with the Predators.

Prior to his time with the Badgers, Piskula also played junior hockey for the Chicago Steel and Des Moines Buccaneers of the USHL, and played in Sweden in the 2016-17 campaign.

On ice sessions at the camp will include daily power skating and/or overspeed interval skating, skill development, along with team concepts and small area games.

“Unlike many neighboring towns, Antigo only has ice for one week in the summer making this time invaluable for local kids,” Piskula noted.  “While the mission has been to provide a great week for Antigo kids, over the years we have had a large increase in players from all over the state.”

“It’s a special week as the kids get to connect to myself and some really great coaches as we work on skills,” Piskula added.  “Personally, I enjoy getting to know these boys and girls, help them improve and watch them grow over the years, I see some from age three journey all the way through high school.”

New this year will be several events sandwiched around the camp itself.  A goalie mini-camp June 9 and 10, will be directed by Tanner Milliron.  Milliron played college hockey at UW-River Falls and has spent time at both the junior and minor league levels as a player.
Milliron has worked as a Goalie Development director with USA Hockey, and a consultant to both the Wisconsin Amateur Hockey Association and Team Wisconsin.

A three-on-three tournament will also be played to close the week, June 16-17.

Other coaches attending the event include Andy Brandt, the Associate Head Coach for NCAA Division III national champion St. Norbert College.  Brandt is also a Badger alumni and has six years of playing experience in both the AHL and ECHL.

Josh Engel is the Head Coach at Rice Lake High School, as well as an assistant coach for U15 Team Wisconsin.  Engel, another former Wisconsin Badger, played four years in the AHL in the Toronto Maple Leafs farm system.

Mike Hanke will complete the coaching staff.  The Antigo alumn is an assistant coach for D.C. Everest High, who made its first ever appearance at the state hockey tournament this past season, and played NCAA Division III hockey for Saint John’s University.

“The camp has been very fortunate with the coaches that continue to make this week a priority in their busy summers,” Piskula said.  “While I still play professionally, my fellow coaches continue to further their hockey careers, accolades, and knowledge of the game through coaching.”

A handful of other college and junior players, as well as AHS alumni, are expected to take part on various days. “We often ask Antigo alumnus that are home from college or playing junior/college hockey to help,” Piskula added.  “They help coaches on-ice, run off-ice programs, and help manage kids throughout the day.”

Registration forms and more information is available at antigohockey.com, or by emailing piskulahockey@gmail.com. 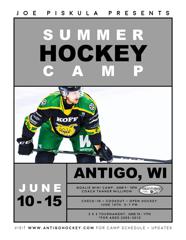