Notre Dame puts a damper on Senior Night in Wausau 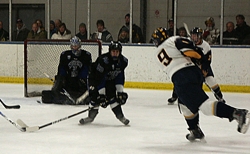 While they were preparing Dollar Lake for the big Pond Hockey Tournament up in Eagle River, just a few miles south in Wausau, Notre Dame Academy and Wausau West were battling on their own “pond” on Tuesday night. Jason Reynolds scored 2:23 into overtime to give NDA a 3-2 win in the Wisconsin Prep Hockey Game of the Week.

While the ice sheet at Marathon Park doesn’t technically qualify as a “pond”, the lack of hot water available for the Zamboni left the surface in much the same shape as those ponds on Dollar Lake. There were a few falls caused by edges caught in the crevices and the occasional odd bounces of the puck, but nothing that made an impact on the outcome of the game. Just a few extra breaks in the action while the officials filled in some canyons.
Wausau West killed off a 5 on 3 powerplay midway through the first period, then had their own chance at a 5 on 3 a few minutes later. It looked like Robbie Poirier was going to put the Warriors up when he fired a one-timer from the right side, but Tritons goaltender Chris Nell lunged across the crease and snagged the puck just in time. About 30 second later, Ryan Condon took a pass from Garret Clemment in just about the same spot and put a shot off the inside of the far post for the only score of the first period.
Notre Dame drew even four minutes into the second stanza when Grant Kluesner fired a shot from low in the left faceoff circle that beat West goalie David Knetter. The Tritons took the lead at 7:52 when Austin Vieth knocked in a rebound off of a Tim Davison shot from the left point. The defenses took over at that point. Despite a lot of end-to-end action both teams managed to keep the other from getting any good chances in front of their net.
Shots on goal were even at 18 each after two periods.
“C’mon, just six more minutes guys”, the Tritons were counting off the time left while clinging to their 2-1 lead in the third period.
Wausau West was able to knot up the score with just 2:23 left on the clock. Condon had the puck behind and to the right of the NDA net. He fed a quick pass out front to Cody Hahner who tapped it over to Clemment who flicked it straight up into the bottom of the net’s roof, setting the teams up for overtime.
West out-shot Notre Dame 10-4 in the third period.
It didn’t take long in the extra frame, just another 2:23.  The Tritons were cycling around the Warriors net when Vieth fed a pass from behind the net out to Steven Phillips in the right circle. Phillips chipped it over to Reynolds who was able to walk in on Knetter, put on a move, and beat him through the five hole.
Ice conditions not withstanding, this was a game that lived up to its billing with the #4 team in the state knocking off #2 in overtime, and unfortunately, spoiling Senior Night for the Wausau West Warriors.