For the first time in recorded history—since 1971, anyway—Pirates will be invading Madison, Wisconsin.

Bay Port Pirates, that is, as the team from the Green Bay area grabbed a two-goal lead in the early going and hung on, not falling off the gang plank as they edged Neenah/Hortonville/Menasha 3-2 Saturday afternoon at Rink 1 in the Cornerstone Community Center.

The Sectional 5 championship was on the line this day, and both teams played all out in an effort to win that reward.

Bay Port had a couple of good chances early on, but NHM goalie Preston Long stopped a 2-on-1 rush and a minute later, Max Moore grabbed a turnover in the slot but flipped a shot wide of the goal.

But Moore would enter into the equation a few minutes later when he found a loose biscuit in the mid-slot and sent a wrister past the NHM goalie to give Bay Port the 1-0 lead and send their student section into delirium. 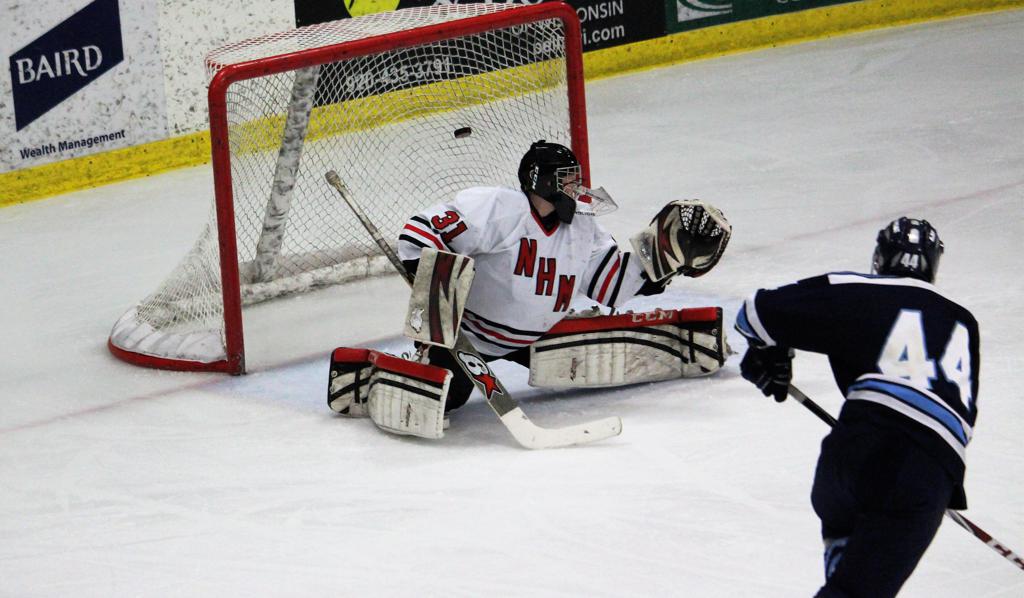 The Pirates got on the board again just 46 seconds later when Aaron Ribar gathered a pass from Bennett DeBouche and went in on a breakaway before he stuffed the puck under the pads of Long to make it 2-0 with seven minutes left in the first.

The Rockets called a time-out at that point in an effort to right the ship.

It worked, and although NHM did not score, they skated off after one period trailing by two. Shots were 12-10 in the period in favor of Bay Port.

Long got warmed up early in the second period, as he negated a 3-on-2 Bay Port rush less than a minute in. And then going back the other way, Alec Elkin tried to muscle through a pair of Pirates defenders but saw goalie Riley Baye make the stop to keep the game at 2-0.

Each team would put a player in the box shortly after and the Rockets used the extra space to score a 4-on-4 goal.

Jack Kraus found a loose puck behind the net and skated to the right side and slid the puck under the Bay Port goalie to cut the lead to 2-1 at the 2:30 mark of the period.

A Bay Port penalty gave the Rockets a 4-on-3 advantage, but it was the Pirates that won that battle, scoring the shortie on a nice effort by DeBouche. The senior captain took the puck in and roofed it to expand the lead to 3-1 and take some wind out of the Rockets sails. 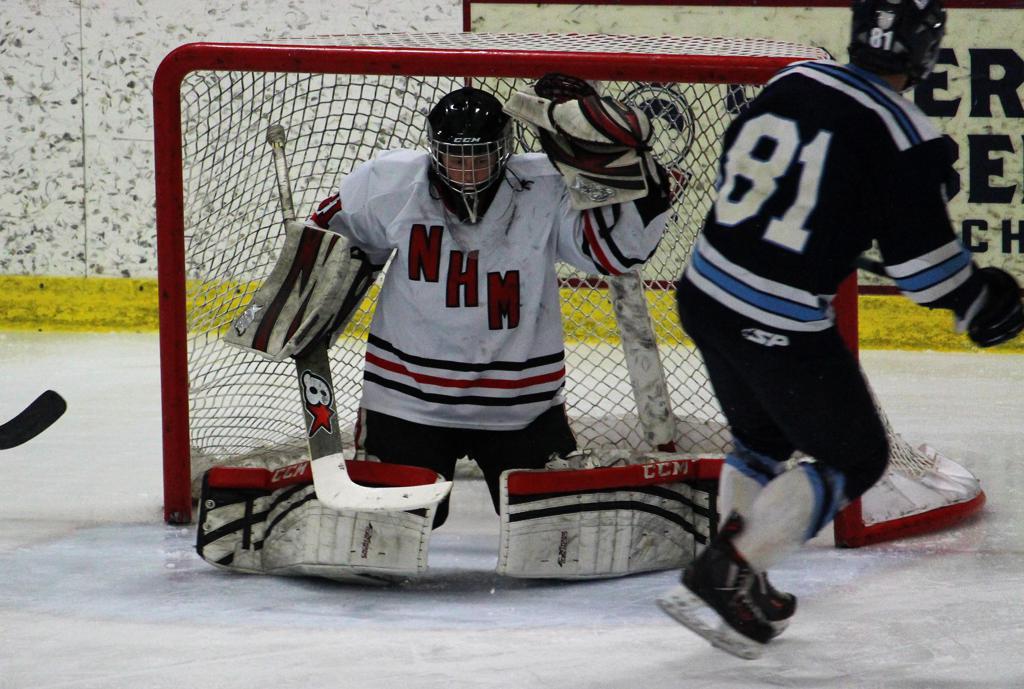 Less than one minute later, the facility came to dead silence as Bay Port defenseman Matt Minch caught a slapper from the point on his visor and went down like he was shot. After a few seconds he got up but then collapsed before the refs blew their whistles. 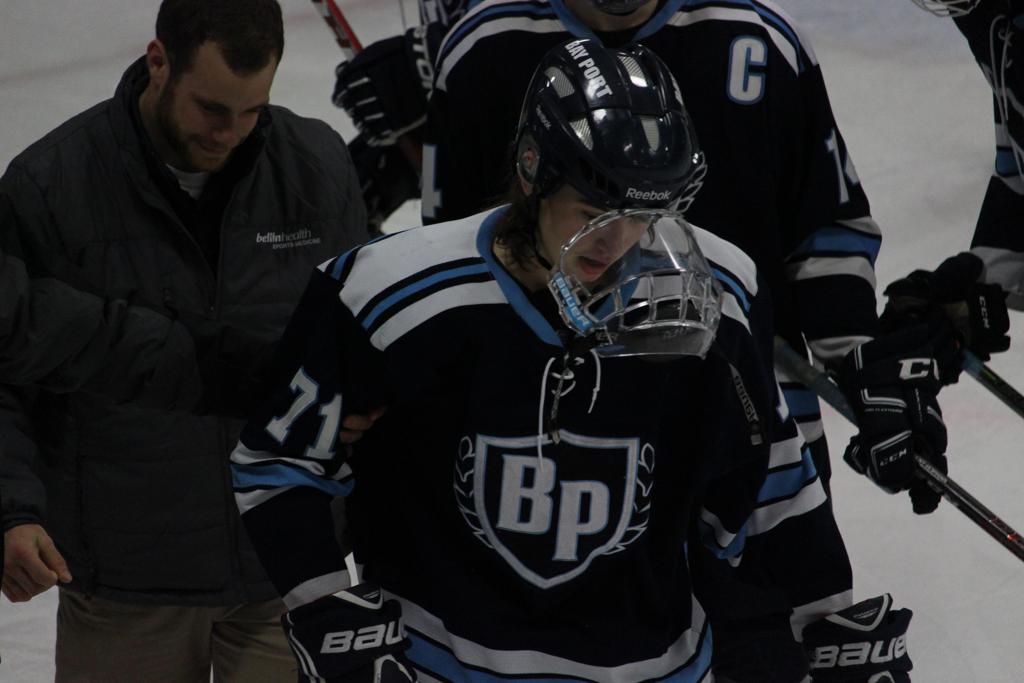 Matt Minch skates off after blocking a puck with his face

Minch skated off on his own a couple minutes later, much to the relief of all on the benches and in the stands. He would sit out the rest of the period but would return in the final period after being checked out and okayed by medical staff.

Play went back and forth for most of the remainder of the period before NHM's star player put his mark on the festivities.

Elkin came in on a 3-on-2 rush and beat Baye on the blocker side from the slot to cut the lead to 3-2. Tyler Hafeman had an assist on the play. 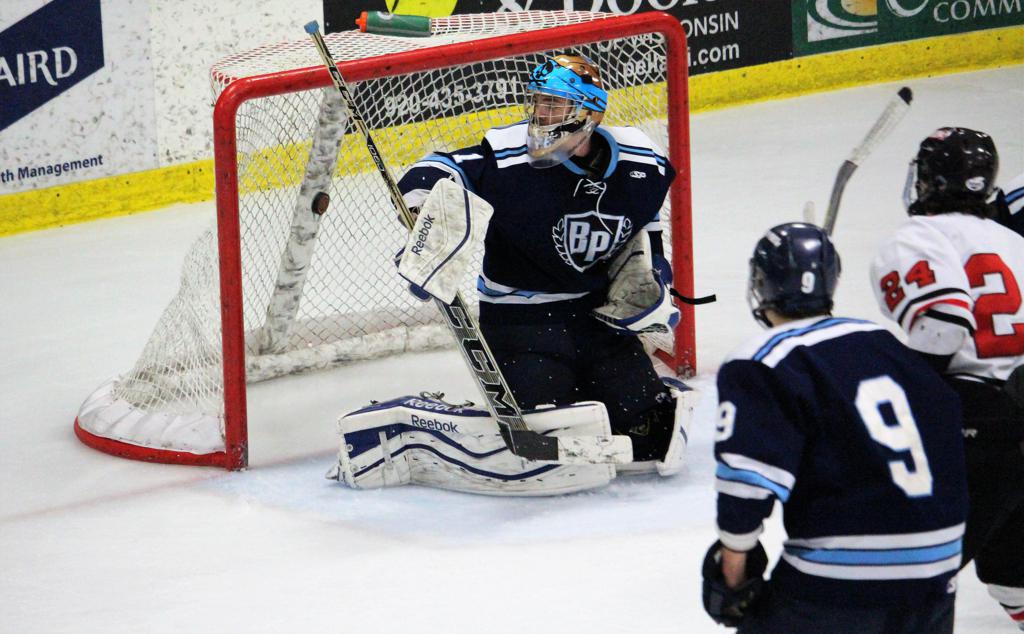 Both teams had chances in the final period, but the defenses and the netminders stood up well as no one scored in the 17 minutes of play.

The Rockets attempted to get Long off for an extra skater a couple times with over a minute to go, but failed to gain possession deep in the o-zone. Finally, while NHM players rushed the puck up-ice, Long came off but NHM failed to score in the last 41 seconds, setting off a major party on the Pirates end of the rink.

Shots were 9-6 in favor of NHM in the stanza.

Long finished with 21 saves in the game for Neenah/Hortonville/Menasha, who ended the season with a solid mark of 18-9.

Baye stopped 31 shots for Bay Port, who improved to 19-9, and will take on Sectional 6 champion Sun Prairie at approximately 1:00pm on Quarterfinal Thursday in Madison.

N/H/M co-coach Mike Elkin: "Great group of seniors, we had a great run with them and they definitely left a legacy in our program. Bay Port is on a roll, they are well coached and they worked very hard for three straight games to earn the trip to Madison."

NOTE: I would like to give a shout-out to my newest hockey friends: Griffin Congdon, Aaron Nusbaum, and Luke Elkin. The trio were filming the game for N/H/M and served as my official spotters during the contest. Thanks, gentlemen!!