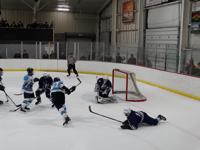 Jordan Brown scores in the third period against Onalaska

The regular season saw teams build their resumes to earn their seeding positions.  RWD and Onalaska were two teams able to argue for their places and had the chance to prove their cases on to who was the better team on Tuesday evening.

RWD took the early lead at 2:19 of the first period.  Onalaska attempted to clear the puck from their defensive zone.  Senior defenseman Austin Schyvinck was able to hold the puck in and fired the shot from two feet inside the blue line and to the right of Onalaska goaltender, Joe Witz.  The puck went over the left shoulder of Witz giving RWD a 1-0 lead. The Hilltoppers came back to tie the game at 15:11.  Onalaska moved the puck a few times back and forth behind the net.  Austin Manglitz scored the goal from in close with an assist from Austin Lubinsky.  Michael Olson finished the period with 10 saves, while Joe Witz had 7 saves for Onalaska.

The second period was a battle with teams keeping up the frantic pace in which they started the game.  Dylan Brown scored the only goal of the period at 15:14 to put RWD up to 2-1.  Witz collected another 9 saves, while Olson stopped 10 shots in the period.

The third period started and you could feel the tension in Poppy Waterman building.  Both teams took the ice and you knew they weren't going to hold anything back in this period.  Brendan Gargaro assisted on Jacob Dirks goal at 4:32 allowing Onalaska to tie the game at 2.  RWD regained the lead at 6:44, when Jordan Bill scored with Dylan Brown and Austin Schyvinck assisting.  The Killer B's gave RWD a 2 goal lead at 8:22 of the third.  Jordan Brown scored the goal assisted by Jordan Bill and Dylan Brown. The Hilltoppers are a team that digs deep with a lot of pride.  Onalaska pulled back to within 1, when Austin Lubinsky scored with Jacob Dirks and Brendan Gargaro assisting at 11:23.  RWD scored an empty net goal, when Jordan Bill ended up with the puck and skated down near the boards in front of the team benches.  The Onalaska defender came over to keep Bill from getting off the shot.  Bill made the centering pass to Andrew Schulenburg.  Schulenburg skated the puck to the top of the crease before putting it in the net to seal the game with 13.1 seconds remaining.  RWD won the game 5-3.  Joe Witz finished the game with 20 saves, while Michael Olson had 29 saves.

The sectional four final will feature two teams whose home rinks are 17.3 miles apart and will play at the Omni Center in Onalaska at 7:00 PM. The title game will feature #5 Baraboo/Portage against #2 Reedsburg/Wisconsin Dells.