Three goals in 38 seconds seals win for the Warriors 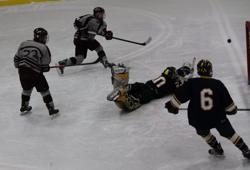 A 38 second span late in the second period turned a tight game into a rout for the top-seeded Wausau West Warriors, as they downed the number two seed Antigo Red Robins 7-2 in Saturday afternoon's Section Three Final in the Dome in Eagle River.

The two teams are known for their strong defense and solid goaltending. The Warrior's Sam Wiegert and Antigo's Ryan Schmidt are finalists for the Kirk Daubenspeck Award. So the capacity crowd was expecting a tight, low scoring game. That's not exactly what they got.

West got on the board first, just a minute and a half into the game. Sam Radenz flipped the puck over the net from behind the goal line on the right side. The puck hit some bodies on the left side and Alex Gessler was the first to react, poking the lose puck past Schmidt for an early Warriors lead.

West added to their lead at the 4:55 mark when Justin Zahn fired a shot from the right side that was deflected by Zach Peterson for the first of his four goals on the day. Just 5 minutes into the game, and it seemed like the Warriors were going to over-power the Robins for an easy win. But Antigo settled down and played even with the Warriors for the rest of the frame. Wausau outshot Antigo 10-5 in the period.

The Robins mounted their comeback in the second period. Alex Nagel started it with a wrist shot from the top of the  right face off circle that just scraped the bottom of the cross bar to put Antigo within one. He tied the game just 18 seconds later. He came into the zone with Joe Kubacky on a two on one. Kubacky fired a low shot from the right side that Wiegert stopped with his right leg pad. The rebound came right out to Nagel on the left, and he fired a shot into the open net as Wiegert dove across to try to stop him.

The sudden outburst was met by an outburst from the Antigo faithful, who once again were given hope for a long-awaited trip to Madison. But big players come through in big games, and West's Kevin Conley decided to squash the uprising. Two minutes after Nagel tied it, Conley got the puck behind the goal line in the Robins zone, fought his way to the front of the net, and forced the puck past Schmidt to put the Warriors back on top 3-2.

This damped the enthusiasm of the Antigo crowd slightly, but then the Warriors were called for the first penalty of the game, giving the Robins a chance to flex their power play muscle. West killed off the penalty, but were quickly called for another, giving the Robins another opportunity. But the Warriors penalty killers rose to the occasion and killed off both attempts.

Then things got crazy. Conley and Peterson teamed up and drove hard into the Robins zone, moving the puck past the defense and Schmidt to extend the lead to 4-2 with just 3:02 left in the second. Ten second later Drew Pearson scored off a pass from Logan Clemment to make it 5-2. 28 seconds after that, Peterson completed his hattrick to make it 6-2 and completely silence the stunned Antigo crowd and send the Wausau fans into an unbridled frenzy.

The Robins called their timeout at that point, but the damage was done, and they would not recover. Wausau West knows how to protect a lead in the third period, and the Robins would never get a chance to get back into the game. Peterson would add a fourth goal to make it 7-2 early in the third, but by that point, the Warriors were just counting down the minutes to another trip to the State Tournament.