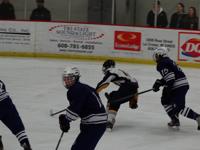 Onalaska hosted Baraboo/Portage in a sectional 4 semi-final game at the Omni Center.

Six seconds into the game, Onalaska had to bring on their penalty kill line as Luke Tepp was called for tripping.  The Hilltoppers killed off the penalty.  Griffin Nicksic of Baraboo/Portage was called for interference at 5:18 of the period, but Onalaska was unable to take advantage of the power play.  The Hilltoppers took the early lead on an unassisted goal by Ian Earp at 7:54 of the first period.  Once again Onalaska went on the power play, when Adam Stanton of B/P was called for interference with 7:46 remaining in the first period.  It was a short lived power play, due to Ian Earp being called for hooking at 10:17 of the first period.  Both penalties were killed off without either team scoring.  Luke Tepp increased the lead to two with John Gargaro and Bryce Bingham assisting on the goal at 15:01 of the period.  Onalaska's Joe Witz had 3 saves in the period, while Sean McCutchin had 17 saves for Baraboo/Portage.

Onalaska's Tepp picked up another tripping penalty early in the second, but Baraboo was unable to capitalize on the opportunity.  Caleb Blank scored the third Hilltopper goal at 5:30 of the second with Ian Earp and Austin Lubinsky being credited with the assists.  Bingham was called for holding at 12:41 of the period, but Onalaska stifled Baraboo once again.  Bingham was accessed another penalty for checking to the head with 32 seconds remaining in the period.  At the conclusion of the second period, Nicksic was accessed with a 2 minute minor for interference.  McCutchin had 8 saves in the second as did his counterpart Witz.

The third period started with the teams playing 4 on 4 hockey and neither team scored during the time the players were in the box.  Bennett Hutson was sent to the sin bin for slashing at 1:57 of the third and Baraboo/Portage went on the power play.  This time B/P took advantage of the opportunity, when Eric Zarrilli scored with assists going to Nick Macdonald and Dawson Hinz at 2:30 of the third.  Thirty-six seconds later, Adam Stanton went top-shelf to cut the lead to one with Steve Mordini assisting to make the score 3-2.  Baraboo's Zarrilli was accessed a minor penalty at 8:39 of the period allowing Onalaska to go on the power play.  Tyler Ebner and Austin Lubinsky assisted on Ian Earp's power play goal forty-four seconds later to put the Hilltoppers on top 4-2.  Baraboo goaltender Sean McCutchin was called for interference at 10:31 of the third period.  Onalaska scored their second power play goal with 3 seconds remaining on the penalty at 12:28 of the third with Jason Havlicek finding the back of the net.  Luke Tepp and Bryce Bingham assisted on the goal.  Onalaska advances to the sectional 4 final with a 5-2 win.  Witz had 6 saves in the third for a total of 17 for the game.  McCutchin stopped the puck 5 times in the final period for a total of 30.

Onalaska moves on to the sectional final, where they will play West Salem on Saturday, March 1st.  The game is currently scheduled for a 4 P.M. face-off at South Wood County Rec Center in Wisconsin Rapids.