Wild third period in WiPH Game of the Week 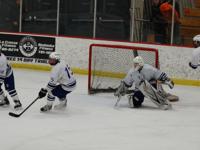 University School of Milwaukee traveled to Onalaska for a battle of number two seeds in their respective sectionals.  Onalaska entered the game with a 18-3-0 record and a Mississippi Valley Conference title for the season.  USM had the Classic Eight Conference title and a 17-4-2 record.

The first period found both teams moving the puck and placing some well placed shots on goal, but unable to find a way to get the puck past the goaltenders.  USM's Chris Keliher was called for tripping with 15 seconds remaining in the first period to place the Hilltoppers on the power play.  The period ended tied at 0.  Joe Witz finished the period with 12 saves for Onalaska, while Bryan Botcher had 10 saves for the Wildcats.

The Hilltoppers were unable to convert on the power play at the beginning of the second period.  Onalaska's Bryce Bingham was called for holding at 11:11 of the period.  Forty-five seconds later the Wildcats' Peter Barney was called for a checking from behind penalty and accessed a two minute minor plus the 10 minute misconduct.  USM and Onalaska were both able to kill off the penalties.  Tyler Ebner was called for interference with 3:34 left in the second to put USM on the power play once again.  The Hilltoppers prevented USM from capitalizing on the opportunity and the score remained tied at the end of two periods.  Botcher and Witz both collected 9 saves in the second period.

The third period found David Mai lighting the lamp with an assist from Hayden Brown and Duncan Brown at the 2:37 mark to put USM up 1-0.  Twenty-four seconds later Onalaska tied the game on a goal by Bennett Hudson with Bryce Bingham and Caleb Blank being credited with assists.  The Wildcats' regained the lead at 3:33 of the third period, when Jake Kandel and Vadim Suhanov assisted on Ben Hrabak's goal.  After seeing three goals in less than a minute, the fans had to wait until 10:09 of the period to see Onalaska's Sam Dabrowski tie the game with assists going to Cam Oberweiser and Griffin Treanor.  That completed the scoring in regulation.  Witz had six saves in the third period, while Botcher had 10 saves.

Neither team was able to score in the 8 minute overtime and the final score was 2-2.  Botcher had one save in the overtime period, while Witz had 5 saves.