Baraboo/Portage Improve to 5-1 Against Sectional Opponents 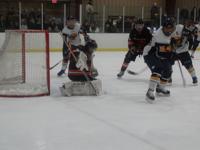 The Panthers took the early lead at 3:16 of the first period, when Bailey Martin picked up a big rebound off of the Thunderbirds' netminder Seth McCutchin and placed it in the net with Trevor Jones assisting on the goal.  The Thunderbirds were able to take advantage of a power play opportunity at 12:31 of the period.  Baraboo/Portage defenseman had the puck just inside the blue line in front of the Panthers' bench and took the shot.  Tyler Laux in the lower part of the faceoff circle to thr right of Julian Grosskopf redirected the shot in front of the net, where Eric Zarrilli redirected through the five hole to make the score 1-1.  Adam Stanton gave the Thunderbirds the lead with 3:28 remaining in the period.  Stanton's shot from the left side of the goal went over Grosskopf's left shoulder and hit just behind the crossbar in the upper right corner with Wyatt Zalewski being credited with the assist giving Baraboo/Portage a 2-1 lead at the end of one.  Grosskopf had 9 saves, while McCutchin had 7 saves.

Taylor Trapp tied the game at 8:29 in the second period with a shot from near the faceoff dot to the left of McCutchin with an assist from Martin.  Dawson Hinz gave the Thunderbirds the lead ten seconds later, when Baraboo/Portage had a rush heading into the offensive zone and found the back of the net.  Zarrilli and Griffin Nicksic assisted on the goal.  Late in the second period, Sean McCutchin made a diving save to his right.  Unfortunately for the Thunderbirds, Taylor Trapp was in the right place at the right time to pick up the loose puck and score a power play goal with a shot over McCutchin with 8 seconds showing on the clocek.  The second period ended with the game all knotted up at 3.  McCutchin had 18 saves in the period, while Grosskopf had 9 saves.

There were a total of 23 penalties written on the scoresheet for the game (11 on Baraboo/Portage and 12 on West Salem/Bangor).  The third period saw West Salem credited with a penalty shot.  Martin took the penalty shot and was celebrating as if he had the goal, but the official was signaling no goal.  Then the officials had him take the penalty shot again (there wasn't any kind of announcement explaing why).  This time there was no doubt the penalty shot was no good as you heard the puck hit the boards.  The Thunderbirds were able to capitalize on a power play opportunity with 3:17 remaining in the game as Logan Jacobs and Tyler Laux assisted on Adam Stanton's game winning goal.  Grosskopf had 9 saves in the period for a total of 27.  McCutchin had 6 saves for a total of 31.