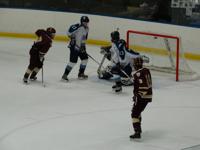 The Hartmeyer Ice Arena was originally constructed to play host to the Wisconsin Badger men’s ice hockey team.  The arena was built in 1960 and UW-Madison agreed to pick up hockey again in 1962.  The Badgers played their first game at “The Hart” in front of 695 fans.  The Badgers played at Hartmeyer Ice Arena from 1962 to 1966.  However, the popularity of Badger hockey pushed the rink to its limits and the Badgers moved to the Dane County Coliseum for the 1967-68 season and played there until 1998, after which the Badgers moved to  the Kohl Center.  The Badgers did play postseason hockey games at Hartmeyer in 1977 and 1978 due to scheduling conflicts at Dane County Coliseum.  The men’s 1980 Olympic team, known for “Miracle on Ice”, held some practices at “The Hart”.  (Some of the information in this paragraph was obtained from  Wikpedia).

The Madison Edgewood Crusaders entered the game trying to stay in the hunt for the Badger South conference title and entered two games behind the Silver Eagles in conference play with a 2-2-0 conference record and 5-7-0 overall.  Jake Dragoo entered the game as the Crusaders leader in points with 23 (11 goals, 12 assists).  Tony Rehm leads the way in net with an .898 save percentage and 2.49 goals against average.

The Silver Eagles entered at 3-0-0 in conference play and 10-2-0 overall.  They were a Honorable Mention in Wisconsin Prep Hockey last week.  Zachary Johnston leads the team in points with 47 (19 goals, 28 assists).    Andryi Nahirniak had the start in net for the Silver Eagles.  He entered the game with a .923 save percentage and 2.75 goals against average.

The game started with the teams feeling each other out like two heavy weight boxers.  The teams kept moving and getting rushes going, but no one was able to get uncontested shots on goal.  Coincidental minors were called at 5:04 on the Crusaders’ Blake Richter and the Silver Eagles’ Derek Provenzano for roughing for some pushing and shoving in front of Monona Grove’s goalie after the whistle.  The Crusaders put the first goal on the scoreboard at 7:55 of the first period, when Grant Reichenbacher popped the puck into the net with Jimmy Curliss assisting on the play.  Mark Zanoya increased the lead to two as he scored an unassisted goal at 10:58.  The Silver Eagles went on the penalty kill 5:01 left in the first, when Garrett Baldwin was called for interference.  Madison Edgewood was able to capitalize on the power play opportunity at 13:15 as Reichenbacher and Justin Dragoo assisted on Nick Kanoff’s goal.  The Crusaders ended up with another power play opportunity with 17 seconds left in the first as Garrett Baldwin was called for interference.  Reichenbacher scored the power play goal 8 seconds later with Kanoff and KC Daniels assisting on the play.  The first period ended with the Crusaders leading 4-0.  Tony Rehm had 7 saves in the first period for Madison Edgewood, while Andryi Nahirniak had 14 saves for the Silver Eagles.

Monona Grove switched goalies at the start of the second period and placed Max McDonald into the net.  The Crusaders’ Jimmy Curliss increased Madison Edgewood’s lead to five with an assist from Nick Kanoff at 2:11 of the period.  Monona Grove found themselves playing shorthanded, when Tyler Patton was called for tripping with thirteen minutes remaining in the second period.  While Madison Edgewood was trying to take advantage of the power play, coincidental minors were called on Edgewood’s Nick Kanoff for elbowing and Monona Grove’s Garrett Baldwin for roughing at 5:02 of the second.  The teams killed off these penalties without anyone scoring.  The Silver Eagles went on the power play at 7:51 of the second, when Blake Richter was called for head contact.  The Crusaders killed of the penalty, but found themselves having to kill off another penalty with 5:43 remaining in the period.   Once again, Madison Edgewood was able to escape without allowing a goal.  Dan Gerhard put the game into runtime with an assist from Mark Zanoya at 14:38 of the second.  Edgewood led 6-0 at the end of two.  Rehm had 8 saves for a game total of 15, while McDonald had 7 saves for Monona Grove.

Mark Zanoya scored at 1:18 of the third period with an assist from Dan Gerhard.    Zanoya went to the sin bin with 15:10 remaining in the game for hooking and the Crusaders were able to kill off the penalty.  There were three Monona Grove players sent to the penalty box at 7:07 of the third period.  Steve Martine was the first player sent to the box and received a 2 minute minor for elbowing.  Zachary and Travis Johnston were both sent to the box with a 2 and 10 for unsportsmanlike.  Reichenbacher scored a power play goal at 8:57 with Zanoya picking up yet another assist.    Final score Edgewood 8 Monona Grove 0.  Rehm had 3 saves in the third for a game total of 18, while McDonald had 6 for a total of 13.