RWD Puts Up a Snowman Against Sauk Prairie 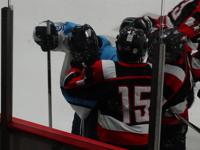 RWD scored the first goal of the game at 12:13 of the first period as Cool Hand Luke Lavely found the back of the net with an assist from Cole Carrig.  The second RWD goal was scored after Logan Marsich stole the puck from Michael Wenzel and turned around to put the puck in the net at 12:33 of the period.  Andrew Schulenburg increased the lead to three with Zach Peschl and Alek Severson being credited with assists.  Tyler Arneson had four saves for RWD, while Sauk Prairie's Koty Ranum had 10 saves.

Alek Severson scored the fourth goal with an assist from Austin Schyvinck at 5:06 of the second period.  RWD was able to capitalize on a power play opportunity at the 7:17 mark as Cole Carrig and Andrew Schuleburg assisted on Jordan Brown's goal.  Arneson made two saves in the period for a game total of six.  Ranum had 21 saves for a game total of 31.

RWD kept applying the pressure in the third period.  Luke Lavely assisted on Austin Wieser's goal at 6:14 of the third period.  Logan Marsich placed a shot on goal at around the 8:40 mark and followed his shot.  Marsich picked up the puck behind the net and placed a centering pass back in front of the net to Travis Slaght and Slaght put it into the net increasing the RWD lead to 7.    RWD finished building their snowman at the 15:50 mark of the third period, when Jordan Brown put the puck in the net with an assist from Zach Zobel and Zach Peschl.  Sauk Prairie's Ranum had 10 saves in the final period and finished with 41, while Arneson had 2 saves for a total of 8.