Steffes began coaching in 2001, compiling a record of 150-109-9, including being awarded the Wisconsin Hockey Coaches Association’s (WHCA) Bob Johnson Coach of the Year award in 2011.   Also that season, the Ledgers marked their best record under Steffes’ 12 seasons (21-5), falling only one game short of a state tournament berth, and proved its most success since the dominating Ledger squads of the 80s and 90s.

During his tenure, the Ledgers joined the Badgerland Conference in 2010, had an undefeated conference record (10-0) and were divisional champs that year, as well as in 2011-12.  His sons, Joe and Pat, each played four seasons for the Ledgers, graduating in 2004 and 2006, respectively.

In 2003 Steffes guided the high school through the formation of the WIAA cooperative school program that is administered by SMSA and includes student-athletes from four area high schools: Campbellsport, Kewaskum, Oakfield and SMSA.  North Fond du Lac has also participated in the co-op over the years.  The mission of the program is to provide the opportunity for students to play hockey when otherwise not offered at their own high school.

“It’s been quite a run,” Coach Steffes said.  “It has been most rewarding to be able to coach my sons through the years along with all of the players who came to play year after year through the high school co-op program.  They put it all on the ice for Ledger Hockey and I’m honored to have worked with hundreds of players, the coaches and many parents I have since 2001.”

Ahern, a 1985 Springs graduate, joined the Ledger hockey staff in 2007 as defensive coach and to assist in rebuilding the hockey program at his alma mater.  He was named Assistant Coach of the Year by the WHCA in 2011.

Ahern was groomed as a youth player through Fond du Lac Blue Line Hockey where his passion for the game began when he was six years old, continued playing at St. Mary’s Springs and played into his first year at the University of Notre Dame, when he put hockey on hold to focus on his studies.

Since 1997, Ahern has coached all levels at Blue Line, Learn to Skate through Bantams, before joining the Ledger program.  Family zeal of the game runs deep, with all five of Ahern’s sons: Brendan, Sean, Egan, Owen and Colin, following in their Dad’s footsteps and playing the sport from a young age on.

“We are grateful to Coach Ty for the enormous commitment he gave to Ledger Hockey.  He made a remarkable and positive impact on this program and the hundreds of young men that played under his tenure,” Ahern said. “I am really excited about the future of Ledger hockey. I was blessed to be a part of a team that either achieved a state hockey title or was runner-up all four years I attended the Springs. To be given this opportunity to lead and build our current program to a level where we can compete once again on that stage is really a great honor and challenge. We are not far off but we must get started as we have some work to do.” 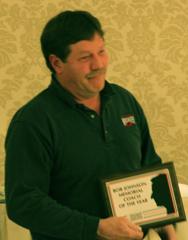 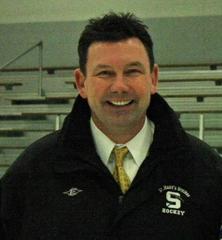