Proof that Goalies are smarter than forwards

Seriously, I am not making this up.

The more hockey games I watch, the more I become convinced that goalies are smarter than forwards. This revelation should come as a shock to many in the hockey community. Especially anybody who is related to a goalie, has spent an extended period of time with a goalie, or has had a brief encounter with a goalie. The first video on the right shows a typical goalie in his natural environment. Goalies tend to think differently, be more “free spirits,” or are seen as just plain odd. You have to be a little off to want to stand in front of an 80 mph slapshot.

And then you have the forwards. Forwards are the glamour boys, the goal scorers. They aren’t necessarily the smartest players, but they are the most popular players, and they always get the girl. The third video on the right shows the typical life of a forward.

These illustrations, of course, only pertain to boys’ hockey. Although I have spent a good amount of time coaching and watching girls’ hockey, I will not pretend to know how girls think or act. I didn’t know it when I was in high school, and I don’t know it now. Being married for 31 years and raising two daughters only helped to further confuse me.

Lately it seems that the goalies have found a way to make the forwards look foolish. And it keeps working, shift after shift, and game after game. I keep waiting for the forwards to catch on and adjust their approach, but it’s not happening.

Back in the day, it was well known that 85 percent of the goals scored were either on or near the ice. Those were the hardest areas for goalies to cover, especially on the stick side. Then came the “butterfly” technique, leg pads on the ice, tilted up and blocking most of the bottom twelve inches of net. Goalies learned to take away the bottom portion of the net, and “give” the shooters the top part.

Goalies will tell you that if you ask them, eventually. It’s hard getting a straight answer out of a goalie. They will say that they do that because a shooter can miss the net by shooting too high, but he can’t miss by shooting too low. A forward will hear that and take it as a dare. “He doesn’t think I’m good enough to hit that opening. I’ll show him.”

So the goalies have taken away the bottom of the net and offered up the top as a sacrifice, and the shooters have taken the bait.

By the time they get to be a starting varsity goalie, the good ones have mastered all of the routine saves. There are certain skaters out there, guys like Nick Monfils, Zed Dietrich, Matt Bulovsky, and the Ford brothers who have a knack for scoring and can routinely put the puck wherever they want it to go. But most of the rest are not going to beat a good goalie cleanly on a straight shot. At least, not consistently.

But goalies want you to think you can. They give you glimpses of hope. Most hockey players are at least familiar with the “shooter’s illusion.”  The picture on the right demonstrates this phenomenon. When the goalie drops down, the shooter sees big openings over each shoulder. If you were to lower your head down to the level that the puck is at, these openings do not appear nearly as big, if they exist at all. It has to do with angles and geometry, which is why, even though they’ve been told, and have seen the videos, the forwards aren’t really convinced that what they see isn’t real. Remember, these are not defensemen. Math isn’t their strongest suit.

So they shoot for that top corner and get one of three results. Every once in a while, they will hit the spot and score a goal. This is like the rare occasion of me hitting a green in regulation. It happens just often enough to give me hope and keep me coming back to the golf course. Other times they will shoot for that corner and the goalie will make an easy glove save. Goalies’ catching gloves are huge, and it really is hard to beat a quick goalie over his glove. The most likely result of the shot is that it sails high or wide of the net, hits the glass behind, wraps around the corner and goes sailing right up the boards and out of the attacking zone.

So without even touching the puck, the goalie has kept it out of the net AND cleared the zone. It doesn’t do anything for their save percentage, but it helps keep that goals against average down. And that is the bottom line.

If the forwards were indeed smarter than goalies, they would stop being selfish and realize that an assist is as good as a goal. They would realize that most goals scored against good goalies are scored either on deflections or rebounds, not by “sniping” the goalie. They would shoot low, through forests of sticks and skates, where the puck can change directions and trajectory. They would shoot it off of the goalies leg pads, where there would be an opportunity for a rebound attempt instead of shooting it into the glove where it dies, or shooting it over the net where it leaves the attacking zone.

When the forwards start working for “team goals” by crashing and rebounding instead of going for the pretty, high-light reel goals, then I’ll think that perhaps they are smarter than goalies. Right now, I’m not convinced. And that worries me. Have you talked to any goalies lately?

A Goalie in his natural habitat

Two defensemen, having a debate

The Glamorous forwards get all the girls 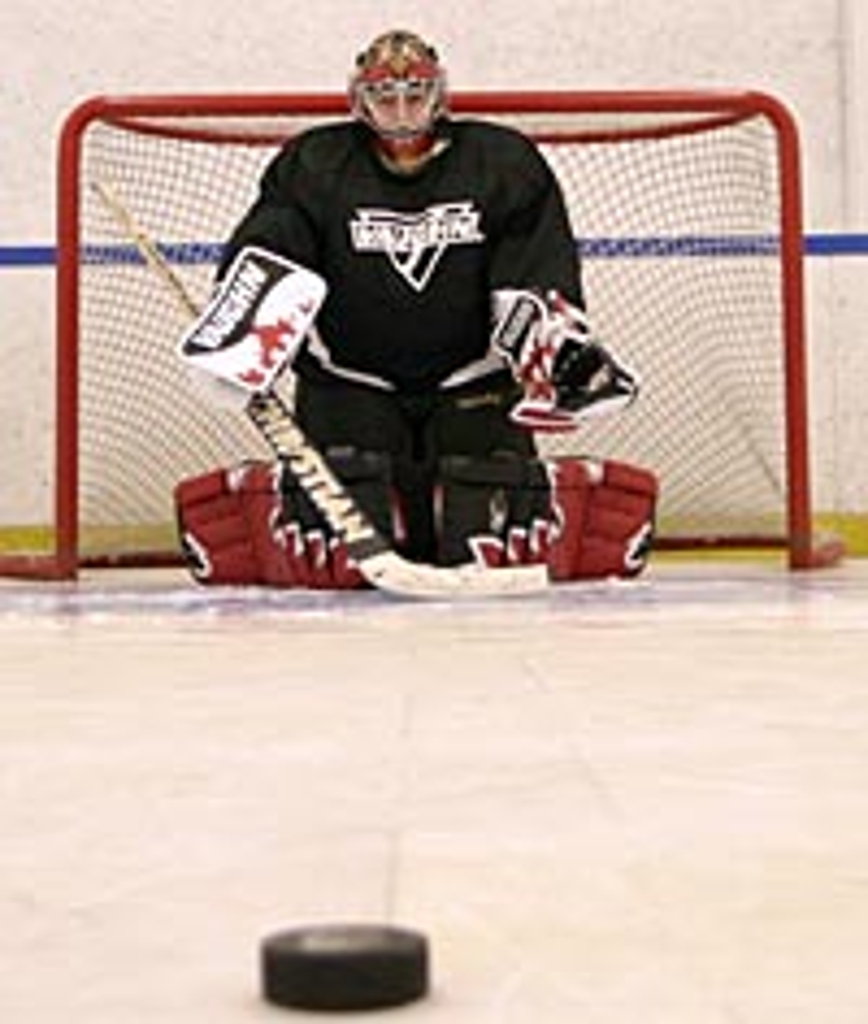