Sabres Even Up Season Series with Fusion

Revenge is a Dish best served cold, in the ice rink that is 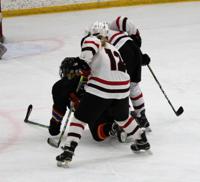 Tuesday evening, the CFM Sabers hosted the St. Croix Valley Fusion in Chippewa Falls. The first period started with the Fusion placing pressure on the Sabers' Kasandra Herr, but Herr was up to the task turning aside all 7 shots. Jasmine Petersen was keeping pace with Herr and turned aside the first 9 shots she faced. The Sabers were not content to end the first period tied at 0. Emelia Bergh made a pass to Brianna Buonincontro in neutral ice. Buonincontro skated in a found the back of the net with 54.6 seconds remaining in the first period to give CFM a 1-0 lead.

Early in the second period, Addisyn Buesgen took advantage of a turnover and gave the Sabers a 2-0 lead at 1:51 of the second period. The Fusion went on a 5-on-3 power play at 5:06 of the period, when CFM picked up two separate tripping penalties on the same whistle. There was a goal 28 seconds later, but it was an unassisted short handed goal by Paige Steinmetz to increase the Sabers lead to 3.  The Fusion were accessed a 2 minute minor for tripping at 6:43. Ashley Slupe scored an unassisted power play goal at 8:37 to increase the lead to 4 for CFM. The Fusion kept trying to get on the board and their efforts paid off at 15:21 as Tinity Mittl scored with Jenna Bermanis assisting on the play. CFM was not satisfied with a 4-1 lead and scored again with 3.4 seconds remaining in the period. This time it was Ashley Slupe assisting on Mabelyn Hebert's goal. The Sabers led 5-1 at the end of two.

The third period saw the combination that started the scoring for CFM on the evening team up again to complete the scoring for the Sabers. Brianna Buonincontro scored at 3:09 of the third with Emelia Bergh assisting. St. Croix Valley picked up their second goal of the night at 4:30 of the period. The goal was scored by Kendall Sundby. Sundby skated from left to right in front of the goal and used her backhand to put the puck in the net with Makenzie Weiss being credited with the assist. This completed the scoring for the game and the Sabers claimed a 6-2 win.