Two of 16 teams that began play in the 2021 Chipotle USA Hockey Tier II 3A National Championship tournament in Green Bay were from the host state. On Monday morning, they were the only teams left standing.

A quick start for the Janesville Jets 18U squad was close to nullified in a frantic third period rally by the Green Bay Bobcats but in the end the Jets held on for a 3-2 edge to grab the gold plate and pennant that signifies the USA Hockey Champions.

Both teams headed into the contest with matching 5-0 records showing themselves as the class of the field talent-wise and they matched it with class in the presentations, many of the players familiar with each other from varsity high school battles.

The Bobcats were clearly disappointed but smiles and hugs were common as players from both teams shook hands with the opposite team after accepting their respective medals. After the medals and plates – silver to the Bobcats and gold to the Jet – and medals were presented, the teams gathered at the presentation table for what seems a rare double-team photo.

The clash of titans matched a Bobcats team that relied heavily on goaltender Lincoln Simons (’04 sophomore Ashwaubenon). Not that the team couldn’t come up with key goals when called on – Grady Coppo (’03 Neenah-Hortonville-Menasha) and Dayne Deanovitch (’03 junior Fond du Lac Springs) both among the tournament’s top five points collectors heading into the championship game.

Meanwhile the Jets also had solid goaltending – Ian Hedican (’02 Senior Madison West) and John (Jack) Schroeder (’03 University School) sharing a shutout in the opening contest and splitting the work throughout the weekend. The best weapon for the Jets seemed to be that it could generate a goal whenever it needed one, as shown against the Minnesota Moose when it fought back from five single-goal deficits and in the quarterfinals when it battled back from a 4-1 deficit in the third period against Cheektowaga Warriors from New York. Heading into the final, Isaac Frenette (’02 senior Chippewa Falls) led all scorers with 11 points, one more than teammate Boone Mathison (’02 senior Tomah).

Both teams battled and left every ounce of what they had on the ice on Monday, the Jets grabbing early control when Mason Manglitz (’02 senior Onalaska) one timed a feed from Mathison (’02 senior Tomah).

Jets carried the 1-0 cushion into the middle frame and widened the gap 39 seconds in as Frenette gathered in a clearing attempt, then skated in and buried a shot just under the bar on the far side over the shoulder of Simons who seemed to have the angle well covered.

Some solid forechecking by Danny Amberg (’03 Tomah) behind the Bobcat’s goal. He backhanded a pass in front to Jordan Degaetano (’03 senior Onalaska) who quickly flipped it into the top right corner just 2:42 later to put the Jets up 3-0.

That lead held up until the final period the Bobcats finally pushing one past Hedican out of a flurry on top of the blue paint with 11:16 to play in the contest. Kole Altergott (’03 Ashwaubenon) jammed it home for the goal with assists for Cooper Routheau (’03 Ashwaubenon) and Tanner Newton (’03 De Pere).

The second goal came with Simons on the bench in favor of an extra attacker as Alex Freund (’02 Senior Neenah-Hortonville-Menasha) banked a shot from beside the goal off the pad of Hedican to get the host squad within a shot.

Jets held off the last frantic attempts for the Bobcats and finally got a chance to celebrate when the buzzer sounded. 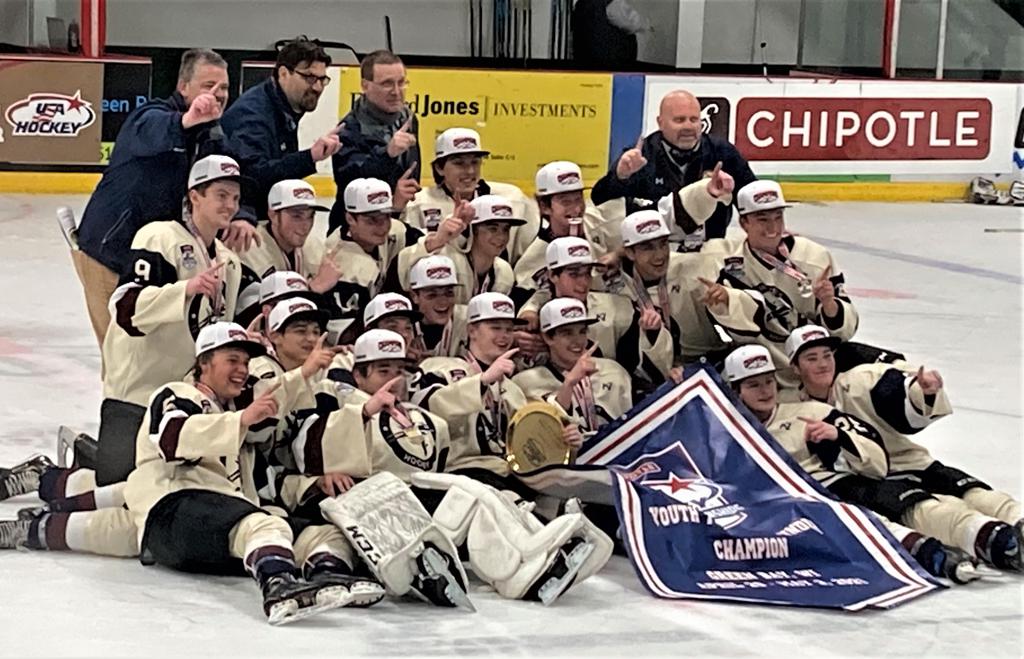