Wisconsin Juniors lose in a shootout at NIT

The Wisconsin Juniors lost a two goal lead in the final minutes of the game Thursday night as the Minnesota Seniors won in a shootout 5-4.

Wisconsin Junior drew a tough draw versus the hometown Seniors but came out flying and scored 17 seconds into the game tonight. Aiden Lenz won the puck forechecking behind the Minnesota goal and passed it out to Madison Edgewood schoolmate Cody Menzel for a backdoor goal that put Minnesota on their heels immediately. Later on in the first period while on a Wisconsin HP-18 Power Play the juniors turned the puck over to the dangerous MN team that scored a shorthanded goal on a late pass 2 vs 1. Taking notes about scoring early and late into periods the Wisconsin Juniors retook the lead on a Tyler Dale snipe from the slot. Carter Mears carried the puck in the zone, crossed the blue line and dropped it to Tyler who rifled a low shot from the high slot to give Wisconsin a 2-1 lead after the first period.

Minnesota tied the game during the 2nd period on a 2v2 rush that MN’s Sullivan Scholle top shelf backhanded past Fixmer. After two period the teams were tied 2-2.

The third period featured end to end action. Wisconsin took the lead a minute into the final frame on a rebound goal by Anthony Heinrichs. Wisconsin then stretched their lead to two with a beautiful back door Power Play goal by Cody Menzal from Lenz and Weibusch.  Waupun Goalie Tyler Fromolz made some great saves to keep Wisconsin HP-18 in this game. Although with 2 minutes left Wisconsin took their first penalty of the game and the Minnesota Seniors were ready to pounce. After pulling the goalie to make a 6 on 4, Grant Ellings from Minnesota winded up alone in front after an in zone faceoff to get MN within one.  80 seconds later while playing 6 vs 5, a fortuitous bounce allowed Sullivan Scholle to tie the game wide open back door.

After the tie in regulation, a 3v3 shootout was declared, with Scholle from MN scoring the only goal to give the Minnesota Seniors a 5-4 victory. 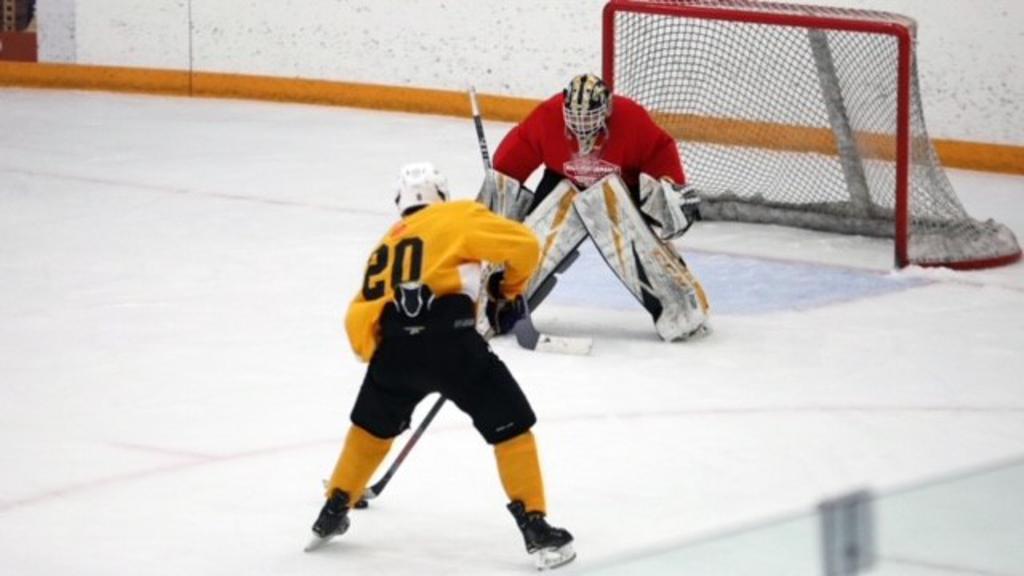