Hudson hands Wausau West their third loss on the season

The fourth-ranked Hudson Raiders made a rare trip east of Highway 53 on Saturday night to take on the number two Wausau West Warriors at Marathon Park. The Raiders took care of the puck and took care of the Warriors, coming away with a thrilling 3-2 win.

The Raiders struck first just 1:55 into the first period. Zach Kochendorfer shot from the right circle and hit the post. The puck bounced out behind Wausau West goalie Kyler Bosley, who did not see it lying at the top of the crease. The first player to find it was Hudson’s Nolan Wagner, and he put it into a wide open net.

That was the only scoring in the period. Bosley stopped the 13 shots that he did see in the first, while at the other end, Alex Ripplinger blocked all five of the shots thrown at him.

The Raiders came out hot in the second period as well. Three minutes in, Sam Ross and Peyton Hanson attacked West on a two on one. Ross swept wide toward the boards, drawing the Warrior defenseman over to him. Ross fed the puck to Hanson all alone in the slot. Hanson came in on Bosley, cut to his right, and backhanded the puck through an open five hole. 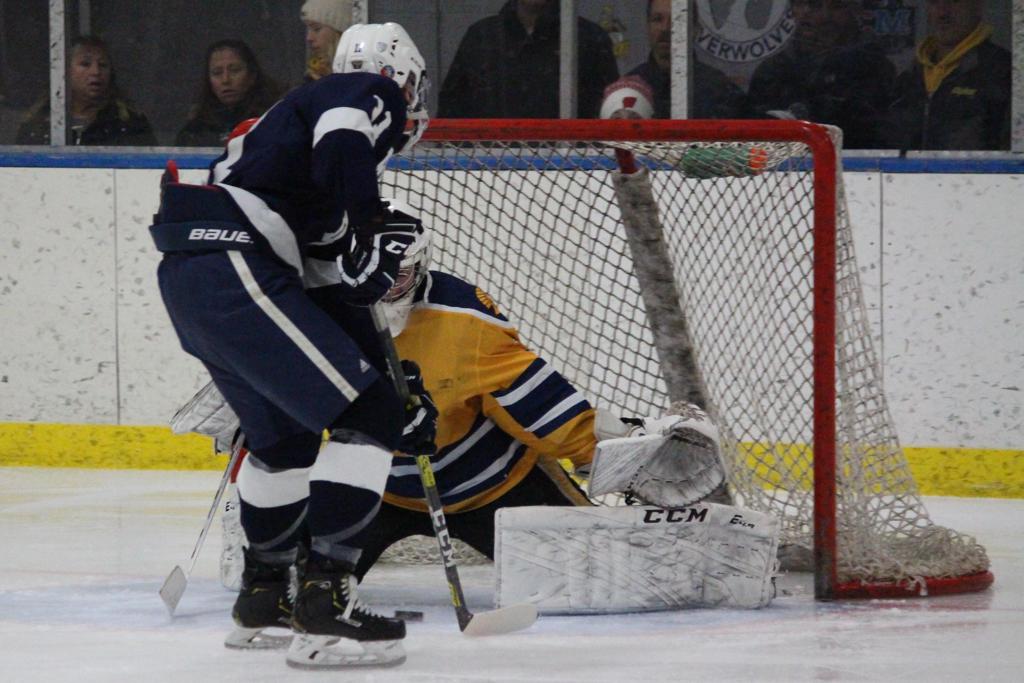 The Warriors came charging back two minutes later. Cade Gruber fed the puck to Chase Parlier in the slot and Connor Wendell knocked in the rebound making it 2-1.

It stayed that way until 13:27 when  Kochendorfer won a clean faceoff straight back to Carter Mears. Mears got off a quick wrist shot that handcuffed Bosley and gave the Raiders their two goal cushion back.

Hudson maintained their time of possession and shot advantage in the second period. Bosley recorded 12 saves and Ripplinger only 7.

West turned up the heat in the third  period, out-shooting Hudson 15 to 5, but wasn’t able to tighten the score until just 1:08 remained.  With Carson Marquardt and Conner Healy battling for the puck behind the Raiders net, Marquardt got hold of the puck and fed it to Ty Bailey in the slot. Bailey’s quick one-timer closed made it 3-2, but that was as close as West could get.