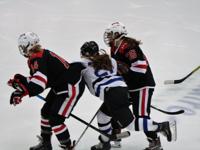 Battle of two teams within the WiPH Top Six would leave one to believe it is going to be a close game. If you traveled to Eau Claire to watch with this in mind, you were not disappointed.

The Stars entered the game with a 7-0-1 record with their most recent game being a 3-1 victory on Tuesday evening. The Lynx came in at 5-1-0 which included a 5-2 win on Friday night.

The two teams were moving the puck and placing pressure on each other in the first period. Eau Claire lit the board with a goal at 6:21 of the period with Cameron Carmody scoring, while Paige Rodriguez was credited with the assist. The Stars took advantage of being on the power play when Annika Olson and Emmie Verhaagh assisted on Madison Schwengler's goal with 1:21 remaining in the first period.  Stars led 2-0 at the end of one.

The second period found both teams with opportunities, but no one was able to capitalize leaving the score as it ended in the first. The third period found everything remaining the same and the Lynx pulled their goalie with 2:33 remaining in regulation. Paige Ruppert put the game away with an empty net goal with 52.1 seconds remaining in the period and Lauren Carmody picked up the assist.

Naomi Stow stopped 23 shots in the shutout, while Camryn McKeresie stopped 30 of the 32 rubber biscuits sent her way.