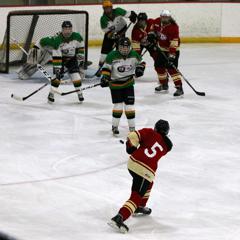 Last year, the girls from the Badger State grabbed the Showcase title with a 4-3 win over Minnesota.

But it was not to be, as MN White got a goal in the first and never trailed, defeating TW by a tally of 3-1 Sunday evening at the Rec-Plex in the St. Louis suburb.

In what turned out to be a great defensive battle (30 total shots on goal), MN scored late in the opening stanza to grab a 1-0 lead.

Aleah Giddings scored the first of her three goals in the game with 1:28 left in the first. Lindsey Bjerke had an assist on the scoring play.

Unbelievably, MN held a 2-1 shot edge in the period.

The second period was a near carbon-copy of the time of goal, as Giddings put in her second goal on a power play with 1:19 left in the period. Bjerke carded her second assist on the goal, which happened seconds after a MN penalty expired.

The period ended 2-0, with both teams putting six shots on net in the stanza.

The locker room talk must have worked for TW, because just 74 seconds into the final period, Amber DeLong scored on a power play, with assists to Abbie DeLong and Lilly Accola, to cut the margin to 2-1.

But then Giddings worked her magic again, scoring with just under 12 minutes to play to give MN their two-goal lead back. Charlotte Huntington assisted on the goal.

TW had a couple power play chances late in the period but were unable to convert and skated off on the short end of the 3-1 game.

Shots were 9-6 in the final period, in favor of MN. In the game, Corrin Hanson (5) and Chloe Stockinger (7) combined for 12 saves.