Reflections from the state tournament

The good, the bad, and the broccoli

Almost every year I compose an article talking about my experiences during WiPH's 'three-day, all expenses paid trip' that is also known as the Wisconsin high school state hockey tournament. The crew from Wisconsin Prep Hockey makes our annual foray to Madison to cover the action that takes place at The Clamshell, er, I mean the Alliant Energy Center.

For us, the tourney begins Wednesday afternoon/evening when the partners arrive from all corners of the state. Our crew has humble abodes in Weston, Reedsburg, Janesville, and Port Edwards, respectively. Our travel times fell in the 45 minute to just over two hours range, and the weather actually wasn't too bad, so there's that.

I was unable to attend the Wednesday night State Tournament/Player of the Year banquet thrown by the Wisconsin Hockey Coaches Association, so MJ Hammett filled in for me and did a great job of covering the stuff that I couldn't. He was there to see Sam Stange crowned as POTY, which probably made MJ's wife Lori happy, as she is an Eau Claire North alum.

After our Wednesday night 'production meeting,' we called it a night and waited for Quarterfinal Thursday to arrive. We got to the rink at 9am and after a slight delay, we were able to get into Suite 506 at the rink and get set up for the day's action.

We had one crew (Kathy, Nikki, Brett) tracking plus/minus during the tourney and you don't realize how hard it is until a game-winner is scored and all 20 players are out on the ice. Do they all get a 'plus?'

Web Junior scored most of the games, did some socialistic media, and filmed the interviews that we did. He also set up, produced, and recorded the nightly podcasts. Thanks for all you do, Junior.

Bob, Del, and I took game pics and I think we captured some pretty good ones. Bob and Del were working at ice level, shooting through the scuffed-up glass, but they got some great images. I worked from the west end of the rink from above and might have gotten two or three pics that actually looked good.

Make sure to check them out. If you see one that you would like to get a copy of, let us know. We do our work for free, so please ask.

Bergler scored some games and wrote game stories, as did I. I think we captured the essence of the games and although neither of us claim to be professionals, I think we did a nice job.

(My goal is to write for Sports Illustrated or ESPN, so if any bigwigs from either of these enterprises read this article, shoot me an email with a six-figure offer.)

I'd be willing to talk.

That was pretty much our agenda for all three days. Del found time to attend the girls' state banquet and did a great job reporting as always, and made a road trip or two back to his hometown to pick up the WiPH End of Season awards and programs during the time we were there.

Those awards took place on Saturday morning at the legendary Coliseum Bar and Banquet on Olin. More than 170 people attended to cheer on their favorite finalists and award winners. We enjoy giving accolades to the top players in the state.

This year, we again had an 'intern' from Eagle River. A couple years back, Jocie Monge worked with us, and that led to this year's appointment.

Northland Pines senior Emily McGee—who does the social media work for the Eagles hockey teams—sent out Tweets during the tournament. She did a great job and we thank her, and wish her the best of luck in the future at MATC.

On Thursday and Friday evening after the games, we did our nightly podcasts from the lobby of our new state tourney home, the Wyndham Garden in Fitchburg. Number one, this is a great place, and number two, the price is very reasonable. If you are in the area and need a place to stay, check out this wonderful facility. And that is not just a paid advertisement. It's a great place!

Thank you, Jason Salus, for your awesome hospitality.

MJ not only emceed the WiPH awards, but did the play-by-play for three games on Friday for teams that didn't have radio broadcasts. And in between periods or games, he would interview players or coaches for video that was posted on YouTube.

Give your voice a break, Michael. It needs it!

One thing that I like to do during the games is check out the crowds, and I saw many things that were pretty cool, but one stuck out.

Dane County Sheriff's Department provides security for the games, and I had a chance to chat with deputies while I was taking pictures and wandering around. They were all very personable, and that is something that sometimes gets lost when people talk about law enforcement.

I talked to one female deputy for a couple minutes, and then left to get up to the upper deck to get back to my 'real' job. A few minutes later, I looked down to where she was and saw a young child, probably about five years old or so, initiate a conversation with the deputy. She leaned down, talked with the child for a few seconds, and as the child left, both had smiles on their faces.

I think this says a lot about what law enforcement is all about.

And I would also like to give props to the AEC ushers. We have been doing games since 2002 and we see a lot of the same workers every year. I find it very enjoyable to stop and chat for a minute with many of them. I think it makes all of us feel good. Errol, you are the man!

The public address announcer made multiple errors each game in regards to time of goals and names of players. I realize the folks in the score/announcing booth have been there for years, but maybe it is time to get some new blood involved?

And the scoreboard had a couple meltdowns this year. Certainly not like in the past, when the horn would sound on breakaways or the whole thing would go blank at key moments. But for the announcer to have to call out time remaining of penalties is just ridiculous.

Also, it seems like there are three different people who track shots/saves. The scoreboard, end of period announcement, and final game scoresheet hardly ever match. Don't you guys talk to each other to come up with the same numbers?

The Coliseum is what it is, but is not the right venue for the state tournament. It would be nice if someone would build a 5,000 seat arena in Wisconsin Dells, or someplace like that. Think of how nice it would be to have the rink at least 75% full. That would be awesome.

Well, at least we can dream.

And the broccoli part of the story? Who cares about broccoli? This is the state tournament!

Hope you all had a great time! 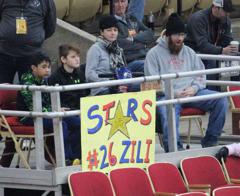 Bored, or just tired from all the 'extra' hockey? 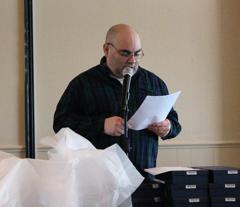 This guy was born to be behind a microphone 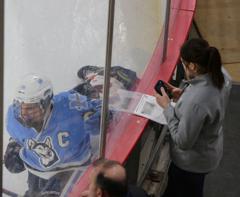 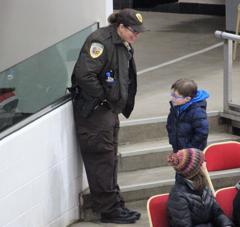 This speaks volumes, the deputy taking time to chat with a youngster 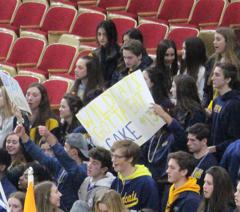 USM students go with the flow 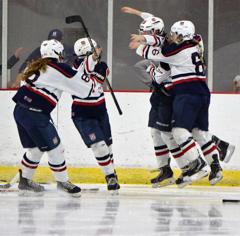 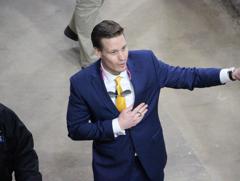